Tramadol is a narcotic/opioid medication used to treat acute to moderate pain. The release or the effect occurs within one hour of taking the medication. The chemical acts at two levels, it binds on the pain receptors and secondarily it inhibits the re-uptake of serotonin and nor-epinephrine. (1) The medicine has been used on children and elderly but some issues have occurred warning the use of the medication under 17 years old of age or above 65 years. The drug can cause addiction, serotonin syndrome, seizures and decrease alertness. It interacts with many drugs such as anti-depressants, other opioids, some antibiotics and certain herbs (St John’s wort, Passiflora…) (2) Patients taking this type of medication should not drink alcohol as it could increase the risk of addiction and possible fatalities. (3) 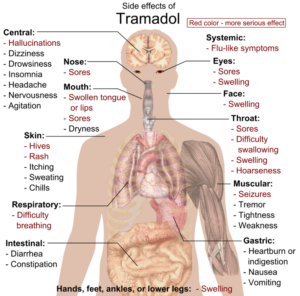 Tonsillectomy and adenoid removal in 1962 Thyroid cancer in 1989 followed by thyroid gland ablation. Spinal laminectomy and fusion from C3-C7 in 2001. Root canal on the right side in 2005. No pregnancy and no abortion. Seasonal allergies. IBS

Patient has constant pain on the right side of her face and it is worse in the morning. She is experiencing what she would describe as “electric shock” on the side of her face 15 to 20 times per day which are unbearable and it forces her to close her eyes and move her head forward. She is also experiencing headaches sometimes. Patient states that she is also grinding her teeth at night causing tooth erosion and stress on the Temporal mandibular joint. She has a strong aversion to heat and she is feeling tired most of the time.

CV: No heart issues to report

Eyes: Normal, no redness and swelling

Face: Right side of the face is not presenting any swelling or redness. Patient is pointing out where she is feeling the electric shocks from the chin to the temporal area of the head.

Imaging: Brain MRI performed and there was no abnormality.

Patient was diagnosed in 2005 with trigeminal neuralgia and she is heavily medicated. She was referred to our clinic March 2015 by her neurologist. We started treating her twice per week and at first her symptoms were fluctuating and slowly decreasing. After 3 weeks of therapy, the patient symptoms started to drastically decrease and the electric shock that she was experiencing decreased and then they disappeared completely. At that time, we suggested that she spoke to her neurologist to decrease her medication. After 6 months of acupuncture therapy, she could stop taking the baclofen and tramadol. We then decreased the acupuncture visit frequency to once per week and a year later her gabapentin was decreased to 900 mg 3x per day. Acupuncture treatment: Liver 3, LI4-LI11 Electro-acupuncture, Ashi points on the right side of the face and yintang. It was not possible to provide any herbal formula due to the potential risk of interaction with her many medications.

After 6 months of therapy, the patient could decrease and then stop gradually her opioid medication and she didn’t have any withdraw effects and the pain on the right side of her face decreased and then stopped. Tramadol is highly addictive and the patient becomes dependent. Opoid medications don’t treat a condition, they are only masking the symptoms. Acupuncture has a cumulative effect and there is no side effects.

How many acupuncture sessions does it take to see results?